“Eric Ginsburg did research for me on a complicated story and this is what I can say about him as a journalist; He sees the story, he goes after it aggressively, and he gets it right.” – Sharon LaFraniere, New York Times investigative reporter and Pulitzer Prize winner

“I came to know Eric through his work — specifically an investigative piece he wrote that got attention throughout North Carolina. Then I had the good fortune of working with him directly, and his reporting and writing exceeded my expectations. Reliable, consistent, hard-working — Eric’s the kind of journalist who would do well in any city, covering any beat. He’s also a stand-up guy. Anyone would be lucky to have him.” – Ana Campbell, managing editor at Denver Westword

“I’ve had the pleasure of collaborating with Eric on projects and on stories, and I highly recommend him as a colleague and journalist. He has a keen eye for stories and is exceptionally creative. He’s self-motivated; his enthusiasm, hard work, and reliability consistently go above and beyond the call of duty. Plus, he’s just a really good guy. It’s always a delight working with him.” – Emily McCord, news director at WFDD public radio station

“Eric came into this business full of enthusiasm and fire. His passion has not waned, but has become more focused and potent. He’s tackled social-justice issues, government corruption, elections, corporate malfeasance and urban issues, among many other topics, with verve and determination. And he can eat a burrito faster than anyone else I have seen.” – Brian Clarey, president of Beat Media Inc.

“Your sensitivity and insights are truly amazing.  I have tremendous admiration and respect for you; your writing is so outstanding!!!!” – Sandy Ginsburg (Thanks, grandma!)

My work for Munchies/VICE was cited in this Washington Post article in November 2019.

My work for Munchies/VICE was cited in this episode of James Beard Award-winning podcast “The Sporkful” in October 2019.

“In the spring of 2019, journalist Eric Ginsburg crafted a popular tweet.” – The Cut (part of New York Magazine) January 2020

My work for the Wine Zine was mentioned in passing in this New York Times article in June 2019. (Hey, take your wins where you get them.) 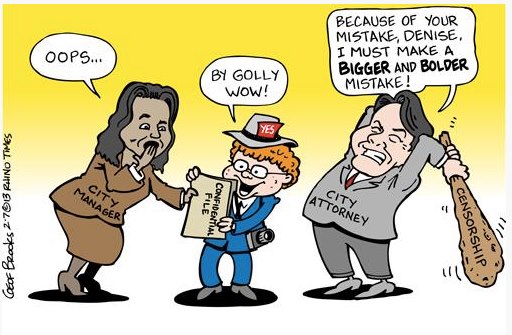 I was featured in a February 2013 cartoon (above) in the Rhinoceros Times for my investigative cover story about police surveillance of activists in Greensboro. A judge denied the City of Greensboro’s request for a temporary restraining order to prevent YES! Weekly from publishing the article, which was based on thousands of files obtained in multiple public-information requests, including information that the city claimed was confidential.

“I read your article and it is one of the most thoughtful and caring treatments available [about the A&T/Dudley Revolt].  Most writers on this subject do not take the time to examine these events from the perspective of those who were the actual participants and rely instead on FBI files, newspaper files and interviews with administrative officials.  Once again, thank you for taking the time to construct an analysis that helps to correct the historical record.” – Dr. Claude Barnes, A&T/Dudley Revolt participant

“Definitely Googled ‘Eric Ginsburg brunch’ on Sunday because I needed recommendations for a friend.” – Lamar Gibson

“You are to be commended for your gutsy analysis of the supposed flash mobs in downtown Greensboro. The column was seriously stunning work — your wording was careful but compelling and I hope your editor gets dozens of emails praising the piece. I plan to do so, and I look forward to reading a lot more of your columns in the future!” -Rae Alton

“Although I’m a little intoxicated, I just wanted to let you know that I enjoyed your beach trip story. Made me smile. Keep it up.” – Stephen